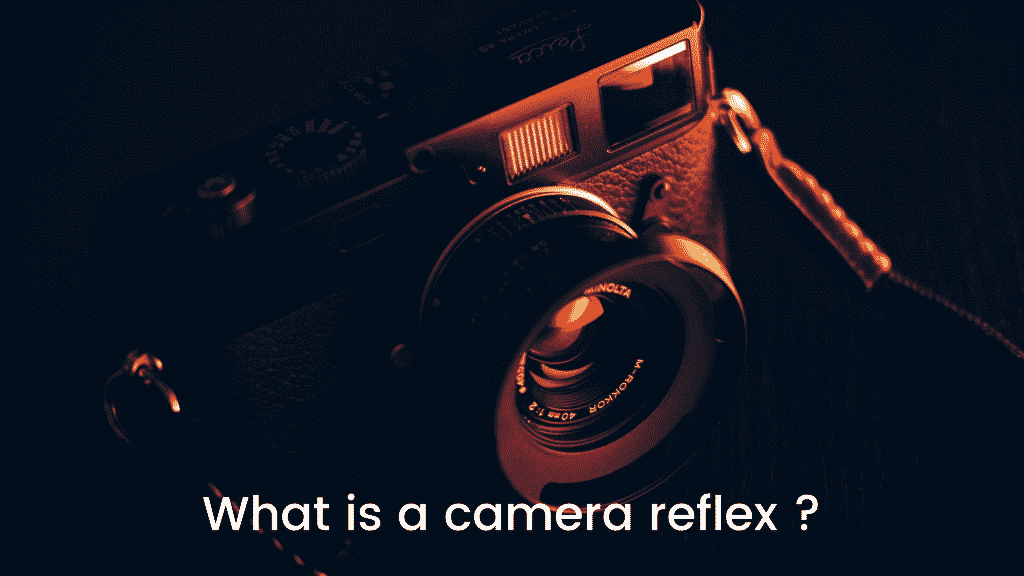 A reflex camera’s name comes from the fact that these cameras use a mirror that reflects ( reflex ) the light coming from the scene and directs it towards the viewfinder (towards the photographer’s eye).

When the shot occurs, the mirror is raised, rotated upwards so that light can reach the electronic sensor (or the film in the case of analog SLR cameras).

Once the mirror is raised, the shutter opens for a time determined by the photographer to let the correct amount of light pass.

That light reaches the electronic sensor and is transformed first into an electrical signal and then into a digital value (a number that indicates how bright each point in the image is).

In an SLR, the scene seen by the photographer through the optical viewfinder is the same as the one the camera will take; there are no parallax errors since both the sensor and the viewfinder visualize precisely the same frame from the same point of view (both collect light coming through the lens).

In all cameras, the image that reaches the sensor is inverted concerning the scene (the top goes down, and the bottom goes up).

For the photographer to see the scene correctly, the optical viewfinder uses a pentaprism or a pentamirror with which the image arriving from the lens is reversed 180º.

The pentaprism mechanism is what gives it that hump or bulge look on top of SLR cameras.

Digital SLR cameras are practically the same as analog (film SLR) for optics and mechanics.

Features of a reflex camera

The main characteristic of a reflex camera is the one we have discussed: it uses a mirror to get the image from the lens to the optical viewfinder.

At present, what is known as SLR is the digital version: digital SLR camera. In English, they are called DSLR: Digital Single Lens Reflex.

Let’s see some characteristics that all digital SLR cameras usually have in common: 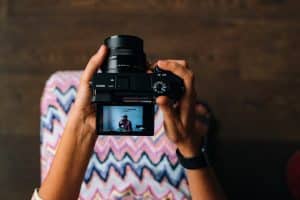 The photographer directly views the scene through the mirror and prism mechanism (pentaprism or pentamirror depending on the make and model).

Through the optical viewfinder, we have the same point of view and the same frame that the final Photo will have (approximately, since depending on the model, the viewfinder sometimes does not cover 100% of the structure seen by the sensor)

For many photographers, the optical viewfinder is essential, as it offers a clear view of the scene directly through the lens.

One of the advantages of the viewfinder (concerning the rear LCD screen of a camera) is that it allows us to completely isolate ourselves from the environment. Thus, it is easier for us to focus our attention exclusively on the frame without distractions.

It is a system with an independent sensor and a secondary mirror that depends on the primary mirror.

It is only operational in photography, not in the video. When we record video or use the rear screen in ‘Live View’ mode, the mirror has to be raised all the time.

The camera itself is the ‘body,’ and the lens is mounted on that body.

The photographer can choose between different lenses, which best suits the scene he wants to photograph. 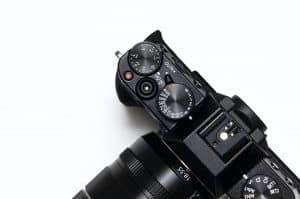 This is known as manual mode, which gives the photographer the possibility to choose how he wants to take each photograph freely.

In this type of camera, the design philosophy is based on offering full user control. Unlike simple ‘ point and shoot ‘ compact cameras or mobile cameras, which are more intended to be used in automatic mode (the camera makes most decisions).

This format allows image information to be stored as it comes out of the sensor, without being processed by the camera and without data loss due to compression.

Also, the RAW format stores the parameters with which the image was taken.

RAW format images are like a film negative. They cannot be used directly for publishing, they must first be developed, and then they can be exported to standard formats such as JPEG.

The RAW format’s main advantage is that the photographer has control and can decide how to develop and process their image.

What is a professional camera?

Reflex cameras were sometimes referred to as ‘ professional cameras ‘to distinguish them from other types of cameras, such as pocket compacts or superzoom (bridge) compact.

This ‘professional range’ is designed to meet the needs of a photographer who makes a living taking photos or videos, depends on his team, and works in many different circumstances, sometimes in very adverse situations.

In these cameras, the viewfinder was located a few centimeters from the lens and aligned with it. Still, the point of view and the frame are different: the structure that the eye sees through the viewfinder is always the same, regardless of the lens that is using the camera. Camera.

You could only guess the frame that the final image would have in cameras with a direct viewfinder.

For example, if you placed a telephoto lens, you could only guess which part of the scene would appear in the Photo. The viewfinder always offers the same angle of view, while the film picks up the angle of view provided by the lens.

Some viewfinders included reference lines for different focal lengths, for example, the frame corresponding to a 50mm lens and a 75mm lens.

There was also parallax, as the photographer’s point of view was slightly offset from the lens’s axis of thought.

And another additional problem is that with a direct optical viewfinder, you do not have any information about the scene’s area that will be in focus. 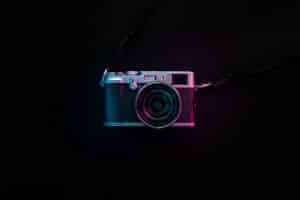 An evolution of the direct viewer was the rangefinder.

In the viewfinder of the rangefinder cameras, two images are combined: the main idea that we would see with a direct viewfinder (the scene) and a second image that arrives through an auxiliary viewfinder physically separated by a few centimeters.

The auxiliary viewfinder typically included a mirror that is mechanically connected to the lens’s focusing system. Logically, there was no automatic focus; the focus was manual and done by moving the lens’s focus ring.

Usually, the auxiliary image only occupies a small portion in the center of the main viewer.

When the scene is out of focus, we see the two images superimposed, not aligned. When the location is in direction, the two images are combined perfectly aligned.

Some rangefinder cameras could also do a small parallax correction.

TLR (Twin Lens Reflex) cameras have a performance that would be halfway between rangefinders and reflex cameras that became popular later.

They use two identical lenses with the same focal length and share the same focusing mechanism.

One of the lenses sends its image directly to the film. Another lens sends the image to the viewfinder, usually through a mirror. The viewfinder on these cameras used to be at the top.

The main advantage is that the photographer sees the same frame he will have in the final image, no matter what lens he uses (since the two are identical).

Another advantage is that manual focus is more straightforward. The focusing mechanism works on both lenses simultaneously, and the image that appears in the viewfinder is large enough to see clearly if it is entirely in focus. Screens or focus foils could also be used for more precision.

Film SLR cameras were a bit of the evolution of TLRs. They managed to do the same but using a single lens and in a much smaller body. In English, they are called SLR ( Single Lens Reflex) to distinguish them from the twin-lens system.

EVIL cameras are the natural evolution of SLR cameras.

They are interchangeable lens cameras and have practically the same characteristics as SLR cameras.

The only significant difference is that they do not use an optical viewfinder (they do not, therefore, need a moving mirror, pentaprism, and all the internal mechanical part used by SLRs)

In mirrorless cameras, the sensor sends the image to the electronic viewfinder and the rear LCD screen.

Therefore, when it comes to framing, what we see through the viewfinder or screen is precisely the same as what we will see in the final image.

Also, these cameras can correctly simulate how the final image will be in terms of exposure, colors, etc.

Today it is complicated to talk about the advantages and disadvantages of mirrorless cameras concerning SLRs. Instead, it is about comparing specific models of both reflex and EVIL. 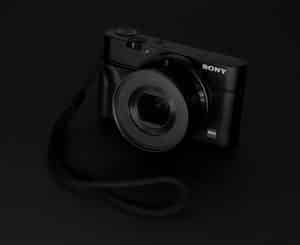 Compact cameras are those that do not allow lens exchange. They are manufactured with specific optics, which is what the camera always operates with.

They also do not include an optical viewfinder (reflex). They, therefore, do not have a movable mirror.

Some include an electronic viewfinder, others just the rear LCD screen.

In the compact camera category, there is a vast range of features and performance.

There are excellent mid-range compact cameras with a minimal and light format, high-quality optics, and many of the functions that reflex cameras include (for example, the possibility of working in manual mode, the case of recording in the RAW format)

You can also find high-end compact cameras, with features very similar to larger cameras, but in a small and lightweight format perfect for travel or to carry the camera in your pocket.

The compact high-end usually includes a much bigger sensor, 1 inch or higher, which provides excellent image quality, especially in light situations where small sensor compacts begin to show their limitations.

These cameras have a format similar to SLRs in terms of size and weight. The optics are designed for each model and cannot be interchanged. They typically include lenses with an extensive zoom range ranging from wide frames (wide angle) to extreme telephoto (long-range)

They are widely used cameras for photography of birds and nature (wild animals).

They are also a good option for travel photography because the lens’s focal range covers practically all situations.

They are usually cameras with small sensors. Therefore they have certain limitations in less light situations.